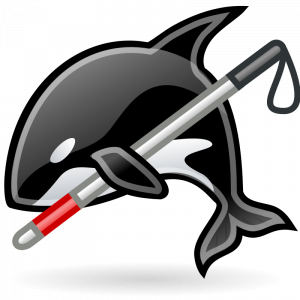 ...a free, open source, flexible, and extensible screen reader that provides access to the graphical desktop via user-customizable combinations of speech and/or braille. Orca works with applications and toolkits that support the assistive technology service provider interface (AT-SPI), which is the primary assistive technology infrastructure for the Solaris and Linux operating environments.

This documentation has been written by a sighted developer without the input of a blind person for testing purposes. Therefore some written advice might be incorrect, such as instructions concerning the use of sudo vs dsudo. [1]

Orca (or any other) screenreader must already be functional on the host operating system. This is unrelated to Whonix ™ and outside the scope of this documentation. The user should be familiar and comfortable with the host screenreader.

It is also recommended to learn VirtualBox basics outside of any reference to Whonix ™; that is, using VirtualBox with any other operating system. Otherwise, any blind users simultaneously utilizing VirtualBox and Whonix ™ for the first time might face serious challenges.

These instructions have not tested whether the VirtualBox host user interface is itself accessible; this functionality is out of scope.

Orca was only recently integrated into Whonix ™, therefore support for using Orca in combination with Tor Bridges is not perfect yet -- please post a feature request if that is desirable. Bridge users should refer to the footnote for a workaround. [2]

Acknowledge that you have read, understood and agreed to our Terms of Service and License Agreement.

Depending on system performance it can take up to three minutes or more until Whonix ™ starts, although on fast machines it boots much quicker. On a reasonable fast developer machine, booting either Whonix-Gateway ™ or Whonix-Workstation ™ took approximately 30 seconds.

One issue is that there is no audio feedback when the boot process finishes. This is an optimization problem because Whonix ™ was originally designed with privacy in mind. Most Whonix ™ users would not want to reveal they are using the platform or otherwise signal they are using an operating system via an audio notification which might be noisy depending on host audio settings.

3. Wait for the boot process to finish.

Press the following keys in combination.

5. Use the easo utility.

easo is spelled e, a, s, o. This is an easy to type abbreviation for easyorca. [3]

Make sure you read, understood and agreed to Whonix ™ binary license agreement [archive] and Whonix ™ disclaimer [archive] before continuing.

Type on the keyboard.

And press the Enter key.

This allows Orca startup and the initial Orca setup to finish.

There should be an audio notification from Orca stating "screenreader on" -- the initial setup of Orca is complete.

At this time there is no need to re-run the easo utility after next boot. Orca will automatically start after next reboot, followed by an audio notification: "screenreader on".

The Orca screen reader is tested as functional in the following applications (non-exhaustive list):

There are several limitations at present:

This chapter is usually not required because these steps are already automated by easo.

Press these keys in combination.

After reboot, Orca should now automatically start. Once the boot process finishes and Orca has started there will be an audio notification.

This chapter is usually not required because these steps are already automated by easo.

setup-dist-noninteractive is a tool to non-interactively use setup-dist. Menu option 1 enables Tor which results in accessing the public Tor network unless the user previously manually configured Bridges.

If required, run this command on both Whonix-Gateway ™ and Whonix-Workstation ™ only.

The following package dependencies are installed:

As at April 2021 the following issues are unresolved:

The following issues have been resolved:

Are you proficient with iptables? Want to contribute? Check out possible improvements to iptables. Please come and introduce yourself in the development forum.