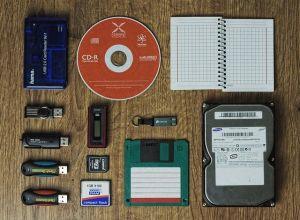 TODO: what is a full raw disk backup

The advantage of a full raw disk backup is that it should be bootable either by:

Unfortunately without either above method any attempt to boot the external drive after the backup might likely lead to actually boot the internal drive because these share the same disk ids after the raw disk backup.

For educational purposes, it is useful to run gparted from the Qubes installation which should backed up as full raw disk backup.

Tested in Qubes R4.0 only. In later Qubes versions with untrusted storage domain, these instructions might need changes.

gparted is a disk partitioning tool which will be used as an easy way to find out how many hard drives the system has and what size they have.

Note: Modify these notes according to what can be seen in gparted.

Check the button below the X (which would close the window) if there are multiple disks.

Since data loss is possible if making a mistake during the raw disk backup procedure, it is recommended to exercise the procedure with completely different hardware. Such as a second computer as well as an external boot drive and backup disk that does not contain any important data.

After booting from the internal disk (which should be backed up).

Create a text file with a small explanation for yourself "Today is day x with date y and time z prior backup number 1."

This will later be handy when doing a restoration test.

3. USB boot operating system should have a graphical diff viewer such as meld installed.

After booting the operating system from USB.

The procedure of installing meld lxqt-sudo gparted is complete.

2. Find out the device paths of the internal drive and the USB boot drive.

3. Find out the device path of the USB backup drive.

4. Use dd to read from the internal drive and to write to the USB backup drive.

In Linux, unfortunately device names and device paths are non-deterministic, unpredictable, might change with kernel versions and operating system upgrades.

A raw backup with the dd can lead to data loss if used incorrectly as dd is a very powerful tool.

The actual dd command is not very difficult but the device paths need to be carefully determined before starting the backup, otherwise data loss is at risk.

2. Do not attach any other disks at this time.

If any other disks are already attached, remove them for now for simplicity.

See what disks are currently attached with an alternative tool such as gparted as well.

4. Attach another disk, the external USB disk which should be used for the backup.

8. View output of the blkid.

For informational purposes only.

9. Confirm the device path of the boot device.

For example. Note: replace UUID with the actual UUID from /etc/fstab.

In above example, the device path of the boot disk is /dev/sdb. Not /dev/sdb1. The 1 means partition number 1. When making raw disk backups of the full disk, partition numbers must be omitted. Otherwise it would just be a partition backup. In this case,

For the author of this wiki page, /dev/sda was the (Qubes) internal disk, /dev/sdb the (Debian) USB boot disk and /dev/sdc the USB backup drive. This might be different for readers!

Note: DATA LOSS POSSIBLE if used incorrectly! Do not use this without prior verification of the device paths!

Without restoration test, it's unclear if the backup could be restored in case needed.

2. Create a (or update) a backup date note file.

4. Find out the device paths of the internal drive and the USB boot drive.

5. Find out the device path of the USB backup drive.

6. Use dd to read from the USB backup drive and to write to the internal drive. (Vice versa backup procedure.)

7. Boot from internal disk to test if the restoration was successful.