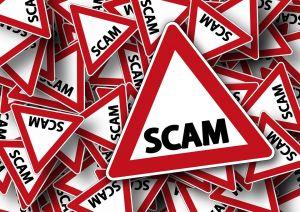 Whonix ™ does not protect against social engineering [archive] attacks. These attacks rely on human cognitive biases and trick people into revealing passwords or other sensitive information that allows the compromise of a target system's security. [1]

Other examples of social engineering include convincing someone to send a copy of logs or other information from the Whonix-Gateway ™ or host operating system machine. In all cases, after trust has been established between the attacker and the victim, and sufficient information has been gathered, an exploit will be executed to perform harmful actions such as stealing personal or financial information, sabotaging the target's system, deanonymizing the individual, installing malware on target systems and so on. [1]

Phishing [archive] is specifically highlighted in this chapter because it is one of the most common social engineering vectors used to fraudulently obtain private information. In all cases, the phisher's modus operandi is impersonation of a genuine business or staff member in order to obtain sensitive personal or financial information from contacted people.

It is notable that social engineering attacks prey on human biases and utilize psychological manipulation techniques. In other words, successful exploitation does not rely solely upon technical measures to subvert the user's platform to achieve the same aim. Attacks using low-technology means are perhaps the greatest risk normal Internet users will face and successful defense requires both awareness and a cautious mindset that can identify how to respond to potential impersonation, lies, bribes, blackmail and threats. There are a host of possible motives for a social engineering attack, but the most common are for financial gain, revenge, self-interest [2] and responding to external pressure from friends, family or organized crime for the aforementioned aims. [1]

In the specific case of Whonix ™, the best tools for maintaining anonymity are the knowledge that comes from research and experience, and healthy skepticism towards scenarios that pose potential security threats.

Although each social engineering attack has unique elements, researchers have identified four primary phases in the lifecycle: [1]

In order to achieve exploitation, attackers rely upon one or more of the following cognitive biases related to influence: [3]

It is notable that appealing and convincing (spear-)phishing emails can be supercharged by artificial intelligence methods. Consider the following research presented at the 2021 Black Hat and Defcon security conferences: [6]

...a team from Singapore's Government Technology Agency presented a recent experiment in which they sent targeted phishing emails they crafted themselves and others generated by an AI-as-a-service platform to 200 of their colleagues. Both messages contained links that were not actually malicious but simply reported back clickthrough rates to the researchers. They were surprised to find that more people clicked the links in the AI-generated messages than the human-written ones—by a significant margin. “Researchers have pointed out that AI requires some level of expertise. It takes millions of dollars to train a really good model,” says Eugene Lim, a Government Technology Agency cybersecurity specialist. “But once you put it on AI-as-a-service it costs a couple of cents and it’s really easy to use—just text in, text out. You don’t even have to run code, you just give it a prompt and it will give you output. So that lowers the barrier of entry to a much bigger audience and increases the potential targets for spearphishing. Suddenly every single email on a mass scale can be personalized for each recipient.”

Researchers emphasized it is easy for malicious actors to get access to OpenAI APIs that provide free trials and which do not verify personal information. This makes it more likely that AI methods will be regularly used for harmful phishing activities in the future, increasing the likelihood of success.

The most common social engineering vectors relate to phishing attacks which are summarized below, as well as related exploitation vectors.

Wikipedia provides a concise summary of this phishing attack vector: [18] [19]

The internationalized domain name (IDN) homograph attack is a way a malicious party may deceive computer users about what remote system they are communicating with, by exploiting the fact that many different characters look alike (i.e., they are homographs, hence the term for the attack, although technically homoglyph is the more accurate term for different characters that look alike). For example, a regular user of example.com may be lured to click a link where the Latin character "a" is replaced with the Cyrillic character "а". This kind of spoofing attack is also known as script spoofing. Unicode incorporates numerous writing systems, and, for a number of reasons, similar-looking characters such as Greek Ο, Latin O, and Cyrillic О were not assigned the same code. Their incorrect or malicious usage is a possibility for security attacks.

IDNs exist because it allows non-English speakers to use domains in their local language. Unfortunately, depending on the font in use supported characters can be visually similar or identical to others. In certain browsers it is possible to construct phishing sites that are indistinguishable from the real, legitimate ones unless IDN is manually disabled and domains are shown in their raw "punycode" format. [20] Punycode encodings allow for various different types of input, including ASCII characters, non-ASCII characters, mixed strings/scripts and foreign languages. [21] [22] Internationalized domain names are prepended with the xn-- prefix, meaning the example domain name "bücher.tld" would be represented in ASCII as "xn--bcher-kva.tld". [23]

At the time of writing the default Firefox and Tor Browser settings remain vulnerable to this attack, while other browsers like Chrome, Chromium, Opera and Safari are protected. [24] To date, Mozilla has decided to rely upon domain registries, standards bodies and browser vendors developing an agreed plan to prevent IDN domain phishing scams. This is arguably a naive approach considering how long this attack vector has remained unfixed (over five years). Further, Mozilla's IDN Display Algorithm FAQ [archive] that is supposed to clarify their position is currently empty.

This situation is clearly unsatisfactory because malicious, spoofed websites can potentially record sensitive information like account details and passwords, among other harmful activities.

Security researcher Xudong Zheng provided a proof-of-concept homograph attack in this 2017 article: Phishing with Unicode Domains [archive]. By utilizing punycode he was able to register a domain name with foreign characters; in this example the domain "xn–pple-43d.com", which is visually equivalent to "аpple.com" due to the font used by Firefox and Tor Browser. The homograph attack is possible because the registered domain is using the Cyrillic "а" (U+0430) rather than the ASCII "a" (U+0061). 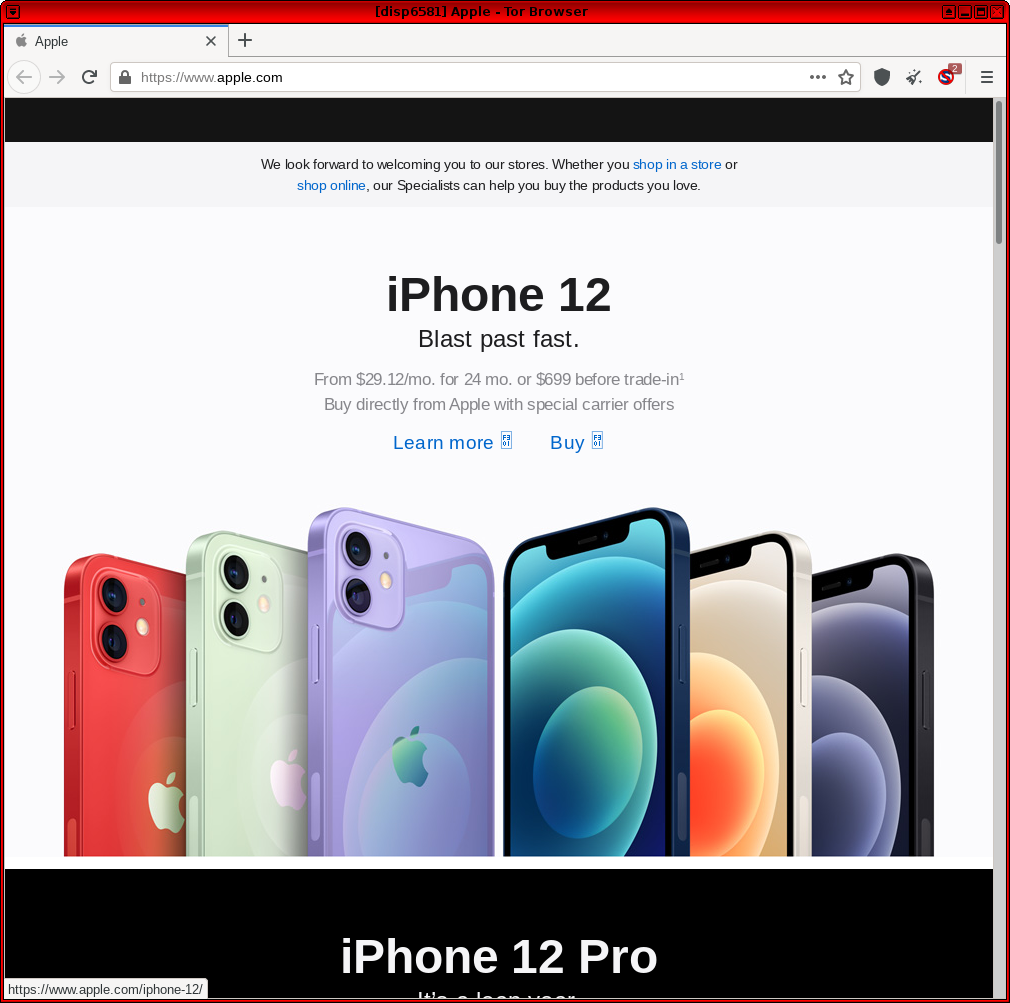 This example illustrates that if the punycode form does not appear by default when multiple different languages are in use (hiding the unicode form), user confusion and spoofing attacks remain a distinct possibility unless a site's URL or SSL certificate is carefully examined.

It is possible to change Firefox and Tor Browser settings to enforce IDN domains in punycode form to detect malicious websites. Note: This may break some website domains utilizing languages other than English because everything will display either as ASCII or ASCII-encoded text.

When navigating to the same fake apple.com website in Tor Browser, the punycode allows identification that it is an illegitimate website.

As the fingerprinting risk of this configuration change is unknown, it is currently unrecommended. To mitigate against this threat, avoid clicking on links to popular websites via emails or on social networking or other sites. Instead, manually type the website address into the URL bar or navigate to sites via reputable search engines. Browser extensions do exist to detect whether visited websites are homographs of another domain from user-defined lists, but this action is unrecommended in Tor Browser due to the fingerprinting risk.

If you run a personal website, it is also possible to check if phishers might have used IDNs to abuse the existing domain name via the IDN checker [archive] website. whonix.org is used in the example below and presently there are no existing, registered impersonations utilizing letters from different alphabets/languages. [26] 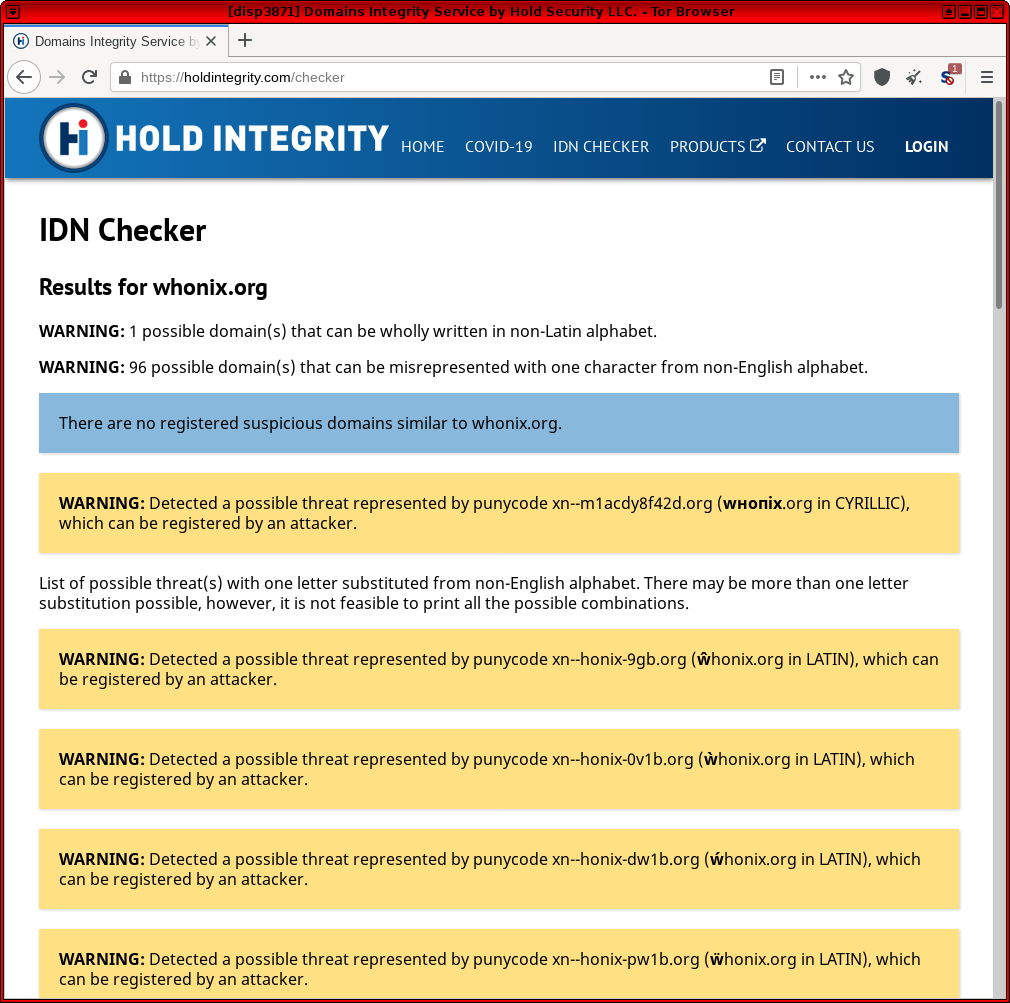 For further reading on this topic, see:

It is difficult to fully protect against social engineering attacks because no system is immune to human elements that can undermine the security of even the most robust systems. This is evidenced by the previous success of attacks that have targeted high-level government institutions, in addition to well-known corporations and business identities.

For Whonix ™ users seeking to protect their anonymity, the simplest solution is greater education and awareness of common methods used by attackers, as well as adopting a skeptical mindset. That means in virtually all cases, users should never provide any personal or other information that can reduce their anonymity set, regardless of the forum. This includes all interactions with fellow Whonix ™ users and developers on the available infrastructure, including forums, developer portals and so on. Similarly, technical advice that is provided should be carefully scrutinized and not followed unless the user is absolutely sure that it will not harm their anonymity.

Outside of the Whonix ™ context, virtually all social engineering attacks rely on an individual's trust in the claims and assumed authority that are invented by the attacker. Unless absolutely certain, potentially sensitive information should never be disclosed and suggested actions should not be performed as they can lead to a breakdown in security systems and theft of personal or financial information.

Organizations also need to employ robust measures that can reduce the likelihood of successful social engineering attacks, as well as limiting the potential harm if/when it does occur. This requires: [1]

With regards to phishing, anti-phishing training can be paired with additional technical measures for protection, including: [27]

Please add screenshots, texts, examples of actual social engineering / phishing attempts with explanations of how it could have been detected as one.