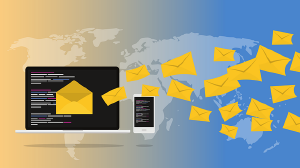 ... a server that receives messages with embedded instructions on where to send them next, and that forwards them without revealing where they originally came from. There are Cypherpunk anonymous remailers

, among others, which differ in how they work, in the policies they adopt, and in the type of attack on anonymity of e-mail they can (or are intended to) resist.

In Whonix-Workstation ™, remailers can be used over Tor. The goal is access to a cheap tool that can send messages without registration, rather than offering more anonymity for (web) messages than Tor can provide.

In practice, the dearth of users and servers means it is safest to assume that remailers provide little to no additional anonymity. Whonix ™ developers would welcome a rebirth of high latency networks and an active, sizable user/developer community, but this is an unlikely outcome in the near-medium term.

If remailers are not careful, various attacks are possible when attempts are made to send mail/messages.

This option is now deprecated. Mixmaster is dead upstream and has been permanently removed from Debian

Interested readers are still free to peruse the Mixmaster documentation. Historical tests with this software were successful -- when utilizing one remailer, mail/messages took between 10-120 minutes before arriving in the recipient's inbox.

As noted earlier, Tor Browser can be paired with a third party web interface. However, this configuration is less secure and should be used with care because the server administrator is capable of snooping on cleartext as it is typed or pasted.

mixmaster public usenet interface has been taken offline due to repeated abuse by botnets. It is now only possible to pay for a subscription to the service.

Note: Readers are welcome to correct any inaccuracies in this section.

suggests these services utilize Mixmaster. Online, associated help files [8] also explain that it is safer to use Mixmaster, since Cypherpunk remailers just provide an email based interface.

Since the full list of type I and type II remailer servers [9] reveals that most type I (Cypherpunk) are also type II (Mixmaster) servers, it does not appear necessary to learn and document how Cypherpunk remailers work. In fact, it does not appear to be an actual alternative, since Cypherpunk remailers cannot be used if Mixmaster is non-functional for some reason. This option would also defeat the purpose of this wiki entry (sending mail without registration), since it still requires a mail provider.