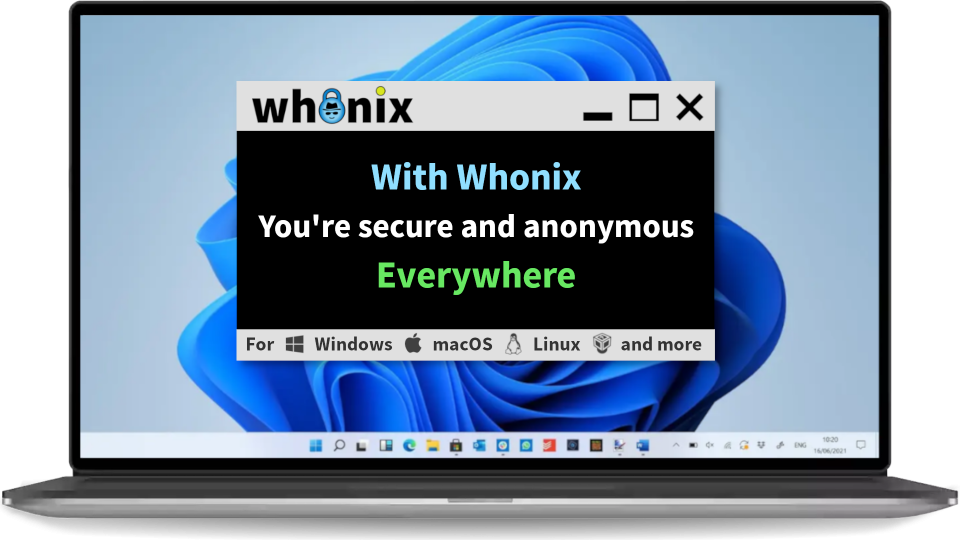 Learn What Is Whonix?

More reliably and securely than any other tool on the market!

Whonix ™ runs like an app inside your operating system - keeping you safe and anonymous. Whonix is available for

Is Whonix safer than VPNs?

For the even more paranoid, there is a lesser-known Tor-enabled OS called Whonix ↗
I use Qubes and a Whonix gateway literally everyday 1 2 3
Whonix adds a layer of anonymity to your business tasks. ↗
Whonix is about as anonymous as an OS can get before it all becomes too inconvenient for normal use. ↗
This split design allows the user to remain completely anonymous and mitigates the risk of DNS leaks, which reveal private information such as your web browsing history. ↗
Whonix, an operating system you can run in a virtual machine to maximize your online anonymity; it’s ideal for maintaining a secret identity. ↗ 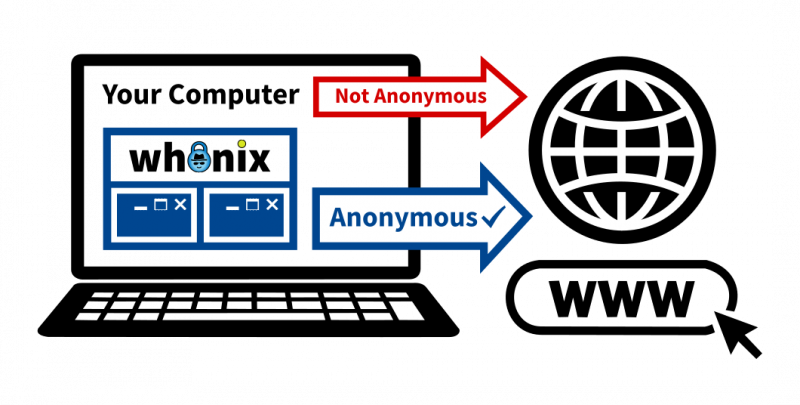 Whonix handles all your activity in a virtual machine and forces all Internet traffic through the Tor network to provide the strongest protection of your IP address.

For over 10 years we have successfully protected our users from everyday trackers and even from high level attacks. And we're just getting started!

You can't be anonymous without being secure. Security hardened operating system Kicksecure is the core of Whonix.

Whonix has powerful protection measures against trackers, malware and many more attack vectors to get your IP address.

Your typing behavior can be used to identify you. Whonix prevents this with a cloak for your keystrokes.

Sophisticated attackers can identify you by the milliseconds that your system clock deviates from standard time. Whonix prevents this.

Tor Browser is optimized for anonymity, provides protection from browser fingerprinting. And millions of daily users help you blend in with the crowd. Anonymity loves company.

Whonix offers a much requested Live Mode. After the session all data will be gone.

Our Firewall is configured specifically for anonymously and securely using the Internet.

Distinct applications are isolated and routed through different paths in the network.

Linux User Account Separation is not always a given on Linux systems. In Whonix it is.

The more you know, the safer you can be: Extensive Whonix Documentation

Legacy login methods can be a security risk. Console Lockdown disables them for improved security hardening.

Running low on RAM isn't a security problem with swap-file-creator. It will create an encrypted swap file.

A canary confirms that no warrants have ever been served on the Whonix project.

Whonix is based on Debian, one of the most reliable Linux distributions.

Downloads are signed so genuine Whonix releases can be verified.

Applications that are reviewed and pre-configured in Whonix

We respect user rights to review, scrutinize, modify, and redistribute Whonix. This improves security and privacy for everyone.

Whonix is Freedom Software and contains software developed by the Free Software Foundation and the GNU Project.

Whonix is an actively maintained research project making constant improvements; no shortcomings are ever hidden from users.

Whonix is independently verifiable by security experts and software developers around the world. This improves security and privacy for everyone.

Linux Kernel Runtime Guard (LKRG) performs runtime integrity checking of the Linux kernel and detection of security vulnerability exploits against the kernel.
Hardened Malloc Light is a hardened memory allocator which can be used with many applications to increase security which is already installed by default and will be enabled by default.
sandbox-app-launcher is an application launcher that can start each application inside its own restrictive sandbox. Each application runs as its own user, in a bubblewrap sandbox and confined by AppArmor.
Full system Mandatory Access Control (MAC) policy - "AppArmor for everything"
Untrusted Root User
Enforce kernel module software signature verification 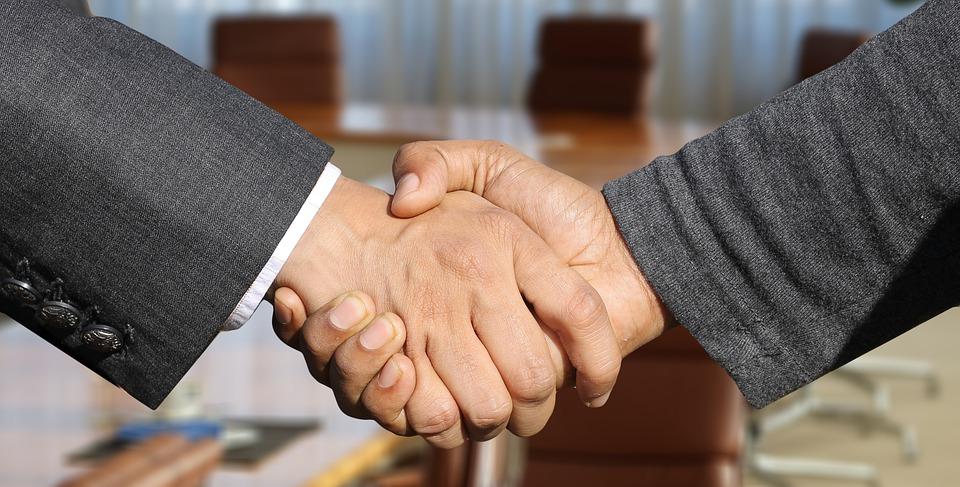 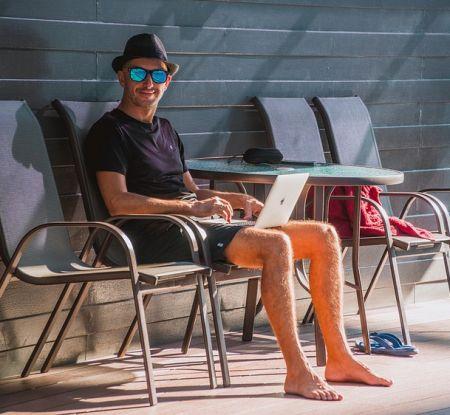 Your help is very welcome! As a patron, as a multiplier or even as a contributor!

Your IP gives away your identity. Cloaking your IP address is difficult because the Internet is not designed for privacy. Whonix solves this problem by forcing all connections through its Dual-VM Architecture .

Internet tracking companies don't even need to know your IP address to be able to identify you. They use so-called Browser Fingerprinting which can track you even better than an IP address.

Even your personal typing style or your individual computer time can give away your identity. Every website has a unique fingerprint so your Internet history is not even safe with a VPN.

Booting into VM Live Mode is as simple as choosing Live Mode in the boot menu. Alternatively Debian, Kicksecure and perhaps other Debian-based hosts can boot their existing host operating system into Host Live Mode.

Whonix utilizes Tor, the best anonymity network, which provides an open and distributed relay network to defend against network surveillance.

Decades of research by the security community lead to many best practices. Whonix is based on Kicksecure which is a security-hardened Linux distribution that implements the consensus of these reasonable security measures.

Whonix ™ is based on Kicksecure ™ which is a security-hardened Linux distribution.

Your typing style can be used to track you. To prevent this, Whonix comes with kloak (a keystroke anonymizer) installed by default

Distinct applications are routed through different paths in the Tor network.

The more you know, the safer you can be: Extensive Whonix Documentation

Tor Browser is optimized for anonymity and millions of daily users help you blend in with the crowd. Tor Browser provides protection from browser fingerprinting.

Tor Browser is the only serious and actively developed browser designed and recommended for anonymity.

The browser is fully featured because it is based on the modern and popular Mozilla Firefox browser, Visit any destination including modern websites such as YouTube.

A canary confirms that no warrants have ever been served on the Whonix project.

In oversimplified terms, Whonix is just a collection of configuration files and scripts. Whonix is not a stripped down version of Debian; anything possible in "vanilla" Debian GNU/Linux can be replicated in Whonix. About Whonix

Downloads are signed so genuine Whonix releases can be verified.

Whonix has over 10 years of success. We have successfully protected our users from everyday trackers and even from high level attacks . With the next decade in mind, we are constantly improving Whonix' privacy and security.

All the Whonix source code is licensed under OSI Approved Licenses. We respect user rights to review, scrutinize, modify, and redistribute Whonix. This improves security and privacy for everyone.

Whonix is Freedom Software and contains software developed by the Free Software Foundation and the GNU Project.

Research and Implementation Project: Whonix makes modest claims and is wary of overconfidence. Whonix is an actively maintained research project making constant improvements; no shortcomings are ever hidden from users.

Whonix is independently verifiable by security experts and software developers around the world; you don’t have to trust developer claims. This improves security and privacy for everyone.