is a popular Bitcoin wallet. According to the Electrum FAQ

How does Electrum work? Electrum’s focus is speed, with low resource usage and simplifying Bitcoin. Startup times are instant because it operates in conjunction with high-performance servers that handle the most complicated parts of the Bitcoin system.

Electrum does not need to download/verify the blockchain and users store their private keys locally.

This is an advantage over some other Bitcoin wallets which are affected by this: if the third-party server were ever compromised, all of the users' bitcoins could be stolen. There is also the possibility that the third-party could lose a user's private keys or walk away with them.

Warning: This documentation is not comprehensive. It should not be viewed as a complete guide to cryptocurrency privacy and security, and does not cover all possible threats that can cause users to lose their cryptocurrency.

Electrum is configured by electrum upstream default to use public third party servers. If users are not using their own self-hosted electrum server (ElectrumX), consider the following quote from the electrum upstream documentation Does Electrum trust servers?

One of the servers, arbitrarily, is selected as the “main” server.

There can be no blanket recommendation for all users which Bitcoin wallet should be used. It depends on:

While Electrum has better usability (is easier to use), above warnings apply. However, for best security, the official Bitcoin client (bitcoin-qt) should be seriously considered for balances of Bitcoin representing serious financial value. For reasons, see Bitcoin Core.

Installed by default in Whonix-Workstation ™.

Should the user wish to use a newer version of Electrum than available in the packages.debian.org electrum package

since Whonix ™ is based on Debian, the user can optionally install Electrum using the usual instructions from the Electrum website. Recommendations from the safely installing software wiki page such as Verifying Software Signatures applies. See also Install Newer Software Versions.

It is possible to uninstall the electrum package but and uninstallation is optional if Electrum is manually installed in home folder.

Users should create a wallet with a strong password!

for comprehensive instructions, as well as more advanced topics like Cold Storage

To start Electrum from start menu.

Qubes-Whonix ™ users are recommended to configure a Split Bitcoin Wallet

to better protect their private keys. To protect against identity correlation through Tor circuit sharing, follow the instructions below (see Stream Isolation for more information).

These steps enable Stream Isolation for the Electrum application.

This is a notice for users of the ElectrumX server. Do not set up stream isolation if electrum should be used in combination with a self-hosted ElectrumX server running inside the same virtual machine since that would circumvent the isolating proxy setup.

When Electrum is started for the first time, users are met with the prompt: "How do you want to connect to a server?". 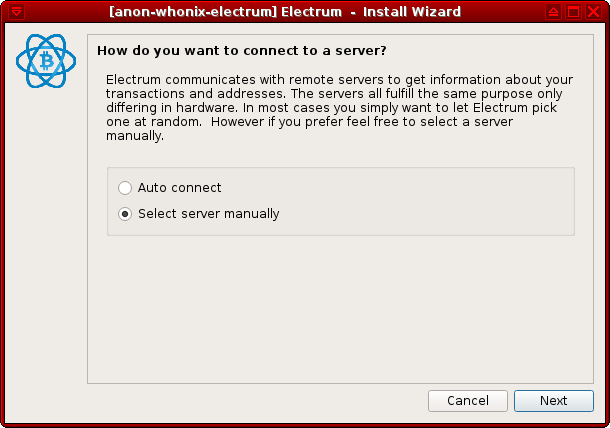 2. Change the proxy settings. This is useful for Stream Isolation.

The necessary settings are:

Press Next and the application should be fully functional. 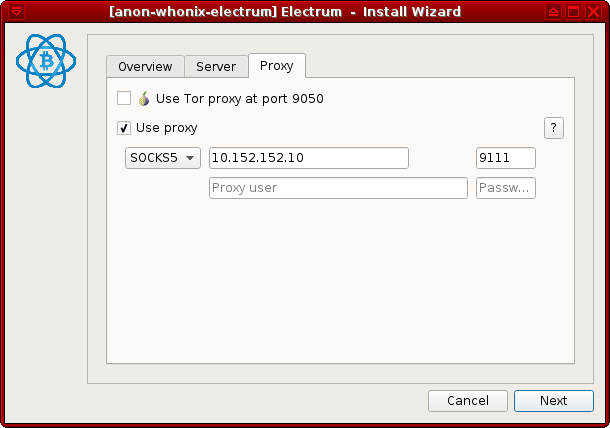 Note: If Electrum is already set up but stream isolation was not enabled, then navigate to Tools → Network in Electrum to bring up the server and proxy settings.

B. Install the dummy-dependency-electrum package(s).

The procedure of installing package(s) dummy-dependency-electrum is complete.

Done, removal of the electrum package is complete.

After installing Electrum, please consider making a donation to Whonix ™ to keep it running for many years to come.