Why does Whonix use Tor 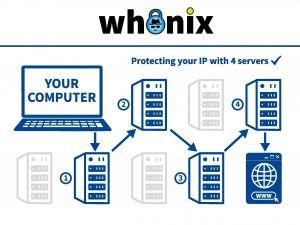 Tor uses 4 servers thanks to vanguards. 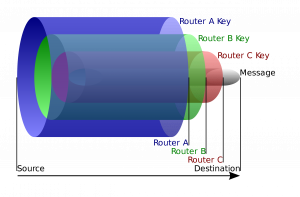 Tor a software providing anonymity on the internet. Thousands of volunteers are running computer servers that keep users anonymous on the Internet. It works by directing the user's internet connection through multiple Tor servers, called Tor relays. The role of each server is to move that data to another server, with the final hop moving data to the end site. 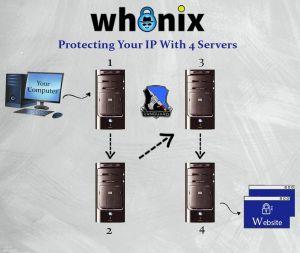 In the past, Tor used 3 servers. Nowadays Tor uses 4 servers, thanks to vanguards.

Number of servers between the user and the destination:

When vising websites using Tor, the Tor exit relay necessarily needs to know the server which the user is connecting to. This is for technical reasons. Otherwise the user could not visit the website. Thanks to Tor's need to know architecture, the Tor exit relay does not know the user's IP address, let alone identity.

Tor exit relays are used by thousands of other users at the same time. Therefore thousands of users are sharing the same IP addresses every day. The advantage of this is, that this improves the anonymity for everybody.

There are thousands of Tor relays. [1]

When visiting different websites, for better anonymity, Tor uses different routes through the Tor network. In other words, Tor does not always use the same 4 Tor relays.

Tor entry guards selected by Tor are being kept for longer amounts of time because that is more secure according to anonymity research. See also Tor Entry Guards. The middle relay and exit relay changes more regularity. This makes it harder for snooping spies to track a user.

A Tor circuit is usually used for 10 minutes before Tor automatically changes the Tor circuit. Long running connections that cannot be interrupted (such as the download of a big file or an IRC connection) however are running as long until these are completed.

Tor actually always has multiple different Tor circuits active at the same time. This is related to stream isolation which is elaborated in the next chapter.

Requesting Tor relays to start logging makes limited sense because of route randomization, jurisdictional friction across multiple countries, unenforceability due to the the voluntary and ephemeral nature of participating running Tor relays in the Tor the network as opposed to running it as a business like VPNs/ISPs which can be regulated by laws in many countries.

The fact that The Tor Project is not in any way related to hosting of relays gives it immunity from from such legal attacks (Organisational Separation) since their code design is protected under free speech laws and cannot be compelled to add subversive features like logging or backdoors. 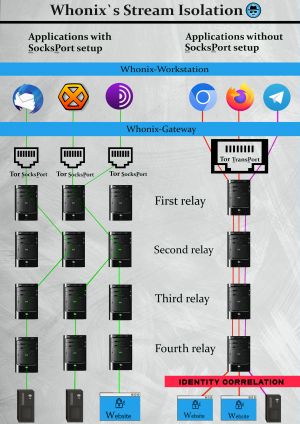 For better anonymity, when visiting different websites using multiple browser tabs in Tor Browser these are using different, isolated network paths (Tor circuits) through the Tor network. [3] These Tor circuits are isolated from each other. This is called stream isolation. Also connections to different Tor Onion Services are automatically stream isolated. [4]

In Whonix ™, distinct pre-installed applications are routed through different paths in the Tor network, stream isolated. For example, operating system updates are always isolated from web browsing traffic. These are never sharing the same Tor circuit. This prevents malicious Tor exit relays and other observers [5] from correlating all internet activity from the same user to the same pseudonym.

The Whonix ™ Project wants to enforce good security by default for our users. That is why a fundamental Whonix ™ design is to force all outgoing traffic through the Tor anonymity network.

After around 20 years of development

, Tor has become a large network with good throughput

) and a lot of capacity

Virtual Private Networks (VPNs) are usually faster than Tor, but VPNs are not designed for anonymity. VPN administrators can log both where a user is connecting from and the destination website, breaking anonymity in the process. [6] Tor provides anonymity by design rather than policy, making it impossible for a single point in the network to know both the origin and the destination of a connection. Anonymity by design provides a higher standard, since trust is removed from the equation.

When using a VPN, an adversary can break anonymity by monitoring the incoming and outgoing connections of the limited set of servers. On the other hand, the Tor network is formed by over 6000 relays and nearly 2000 bridges

) run worldwide by volunteers. [7] This makes it far more difficult to conduct successful, end-to-end correlation (confirmation) attacks, although not impossible.

Despite Tor's superiority to VPNs, poisoned Tor nodes pose a threat to anonymity. If an adversary runs a malicious Tor entry guard and exit node in a network of 7,000 relays (2,000 entry guards and 1,000 exit nodes), the odds of the Tor circuit crossing both are around one in 2 million. If an adversary can increase their malicious entry and exit relays to comprise 10 percent of the bandwidth, they could deanonymize 1 percent of all Tor circuits. [8]

Tor has the largest user base of all available anonymity networks. More than 2 million users

) connect to Tor daily. Tor's adoption by a substantial audience proves its maturity, stability and usability. It has also led to rapid development and significant community contributions.

Tor has partnered with leading research institutions and been subject to intensive academic research. It is the anonymity network which benefits from the most auditing and peer review. For example, see Anonymity Bibliography | Selected Papers in Anonymity

Tor has received awards from institutions like the Electronic Frontier Foundation

and the Free Software Foundation

An extract of a Top Secret appraisal by the NSA characterized Tor as "the King of high secure, low latency Internet anonymity

The Tor architecture is based on a strict implementation of the need-to-know principle. Each Tor relays in the chain of anonymizing relays has only access to information which are required for its operation. In short:

1. The first Tor relay knows who you are (your IP address), but not where you are connecting to.

2. The second Tor relays knows your Tor entry guards, but doesn't know you.

3. The third knows your second Tor relays, but of course also doesn't know you.

4. The fourth Tor relay (also called a Tor exit relay) knows your third Tor relay, necessarily needs to know the destination server (such as a website) you're connecting to, but of course has no idea who you are.

The overview below Which Tor relay knows what? and Tor Relay Information Awareness are expressing the same principles in different words and formats with more details.

The information available to each of the Tor relay is summarized below.

The user's Tor client is aware of all information from above categories. This is because by Tor design, the Tor client plans its Tor circuits (paths through the Tor network).

There is a clean organisational separation between,

For the implementation of the Need to Know Architecture Tor uses multiple layers of encryption.

The message and IP address for the destination server (such as for example a website) is wrapped into at least 4 layers of encryption as illustrated in the following diagram. 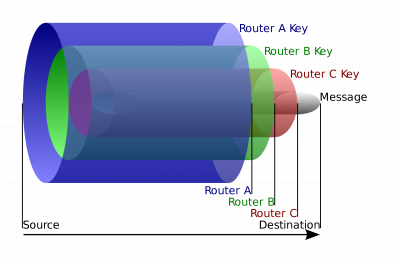 1. The communication between the locally running Tor client and the user's machine with the first Tor relay is encrypted.

3. The message is passes through the Tor network from the Tor relay chain (as decided by the user's Tor client) until it reaches the last Tor relay, the Tor exit relay.

5. The actual message for the destination server could be either encrypted or unencrypted. That depends on the application chosen by the user, if:

Relationship between the Tor Project and Whonix ™[edit]

Many people use Tor outside of Whonix ™. Similarly, a significant number use Whonix ™ for activities other than accessing the Internet through Tor, for example hosting onion services, tunnelling I2P through Tor, tunnelling VPNs or other anonymity networks through Tor, and more.