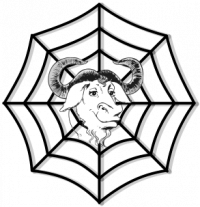 GNUnet is a next generation, private and anonymous P2P networking stack that rebuilds the internet from the bottom-up on these principles. It exceeds all the other members of the big four (Tor, I2P and Freenet) in scope and design assumptions. [1] [2] Architecturally it is a master-piece that has been undergoing constant development since 2001.

A no where near exhaustive feature list: (GNUnet has 45 deployed subsystems for details see: [3] [4])

These instructions are incomplete.

GNUnet's capabilities makes it an excellent choice for a planned Whonix ™ notification system, a censorship resistant host of project files and even as a Tor alternative on the gateway in the future. It is currently packaged in Debian but the rapid development cycle makes the versions packaged in stable obsolete and incapable of connecting to the network. See ticket

The procedure of installing package(s) mmdebstrap systemd-container apt-cacher-ng is complete.

Or start systemd inside chroot. This requires using above command, creating user password, otherwise no login is possible.