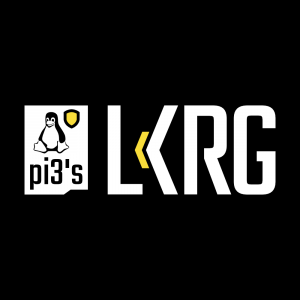 The focus of this wiki page is to provide simplified user documentation and easy installation of LKRG in Debian, Kicksecure, Qubes, Whonix, and perhaps Debian-based Linux distributions. Installable from an APT repository.

This is a lightweight software fork [archive] and no changes will be made to the core of LKRG. Links to the official LKRG homepage [archive] and other original resources can be found here.

This is only a very brief introduction, since LKRG technical details are not the focus of this page. Quote official LKRG homepage [archive]:

LKRG performs runtime integrity checking of the Linux kernel and detection of security vulnerability exploits against the kernel.

As controversial as this concept is, LKRG attempts to post-detect and hopefully promptly respond to unauthorized modifications to the running Linux kernel (integrity checking) or to credentials such as user IDs of the running processes (exploit detection). For process credentials, LKRG attempts to detect the exploit and take action before the kernel would grant access (such as open a file) based on the unauthorized credentials.

LKRG defeats many pre-existing exploits of Linux kernel vulnerabilities, and will likely defeat many future exploits (including of yet unknown vulnerabilities) that do not specifically attempt to bypass LKRG. While LKRG is bypassable by design, such bypasses tend to require more complicated and/or less reliable exploits.

No benchmarks have yet been performed, but it appears the performance penalty is around 2.5% for fully enabled LKRG.

Out of 90 benchmarks run comparing the performance hit on this Intel Core i9 9900KS from LKRG, having LKRG enabled led to around a 5% hit based on the geometric mean of all tests carried out. Granted, some real-world workloads like code compilation speed were impacted much more dramatically while test cases not involving I/O or other kernel operations tended to see no measurable difference in run-time performance.

See the full article Benchmarking The Performance Overhead To The Linux Kernel Runtime Guard [archive] for a detailed benchmark.

Contacted upstream LKRG developers privately. To paraphrase: "We don’t oppose you packaging it. As long as LKRG exists, there will always be a free and libre version. There is no pro version yet. A hypothetical future pro version would not change that." In my words: "there won’t be a grsecurity alike situation where everything gets closed down".

We will likely use GPLv2 at least for LKRG free. We might or might not use a different license for LKRG Pro, if we ever make it.

Users who benefit from LKRG Free are encouraged to support its further development. However, at the time of writing they are not accepting donations: [2]

We used to accept donations for LKRG via Patreon, but we currently don't. Some of our former supporters are listed in the PATREON file in LKRG distribution tarballs.

Optional: See Whonix ™ Packages for Debian Hosts and Whonix ™ Host Enhancements instead of the next step for more secure and complex options.

The LKRG installation is complete. [9]

It is recommended to review optional hardening and other entries below, but this is not required.

It might be possible to further improve the security provided by LKRG though LKRG configuration, but this can potentially lead to decreased system stability. Note: Unspecific to Whonix ™.

Note: All the possible configuration changes in this section are optional.

Once LKRG has been installed, little effort is required since it will protect the kernel without the user's knowledge and/or interaction. However, it is sensible to check that LKRG is running correctly and to monitor system logs for any suspicious entries. Check this entry at a later date for any additional recommendations.

At this stage a graphical user interface (GUI) is not provided that can proactively inform users who fail to analyze the systemd journal log for relevant LKRG messages. A GUI or popup notification might be developed later on -- help is most welcome.

To account for the hopefully unlikely but really unfortunate event that some incompatibility between the Linux kernel or other components of the system and LKRG isn't detected prior to LKRG installation yet leads to system crash on bootup, we've included support for the "nolkrg" kernel parameter in the systemd unit file for LKRG. Thus, if you've followed the above installation procedure for LKRG with systemd, you may disable LKRG by specifying "nolkrg" on the kernel command-line via your bootloader. The system should then boot up without LKRG, and thus without triggering the problem, letting you fix it.

[...] I would use a different kernel cmd parameter: `systemd.unit=emergency.target` -- which drops me to the shell before even mounting (as read/write) the root file system, and I can disable whatever service I want. [...]