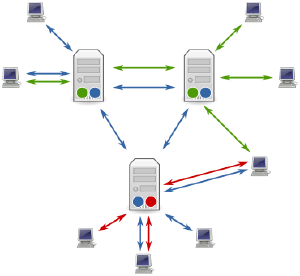 Interesting parts of Usenet other than discussion, include alt.anonymous.messages, Nym servers and Nym server URL Retrieval.

alt.anonymous.messages is a public newsgroups supposed to be used to post encrypted and anonymous messages. Getting anonymity and encrypting the messages is up to the user.

It may sound like a disadvantage, but it is an advantage. In comparison, you can never know how many people are using an e-mail provider. Posting in alt.anonymous.messages everyone knows which messages got posted when, but when done right, no one knows who posted a message and what the content of the message is.

Do not use a web service to read individual messages in alt.anonymous.messages. Use an NNTP client (such as Thunderbird). Subscribe to the whole newsgroup and download all messages including headers.

Ideally, posting to alt.anonymous.messages can be done using Mixmaster and when it is run inside Whonix-Workstation ™, its traffic gets routed through Tor beforehand. See the Mixmaster article for instructions on using Mixmaster. (Mixmaster was deprecated upstream.)

Using alt.anonymous.messages could be suspicious by itself, but if you do it right, your adversary may not even know, that you are using it. Since the use of remailer is tunneled through Tor, no one should know, that you are aware of the existence of the remailer network at all. There are currently no known functional retailers.

If you are serious about using it, you should study the work of De-Anonymizing Alt.Anonymous.Messages so you can prevent doing that same mistakes.

Nym server connection sequence can be illustrated as:

It is a kind of protection, a proxy chain in front of an e-mail inbox.

Or in other words, a Nym server provides an e-mail address, where incoming mails are forwarded through a configurable chain of mail servers (Remailer), while not revealing the recipient's inbox to the sender.

It is my understanding, that the sender's email address will not be known to the recipient, because the remailer will strip it. (Unless the sender specifies it in the text.) However, the one sender of an e-mail is responsible for their own anonymity.

Another question is, if today's remailer really improve security. [1]

Nym server URL Retrieval is a way to download a web page with high latency and especially when combined with Tor, in theory, safer than Tor alone. In practice, there may be no additional anonymity from today's high latency networks and you could end up being one of the very few people using such, in theory, great services. For explanation about high latency network anonymity see Anonymity Network article[2] Further information on the bottom of mixnym.net

Please note that, Whonix ™ developer Patrick Schleizer can not answer support requests related to Nym servers. This possibility has just been pointed out and wasn't tested in practice. It is a whole different thing than Whonix ™ and very technical, difficult with many stumble points. Please look for another way, if you need support. Setting up Nym is not Whonix ™ specific. Success stories, use cases, comments, improved documentation etc. however is welcome.

Quoted from Usenet Wikipedia[3]: "Usenet is a worldwide distributed Internet discussion system." The Wikipedia article is worth reading as an introduction.

You can read news groups either using an NNTP client, such as Thunderbird or an online reader such as Google Groups. Posting to Usenet using Google Groups is not recommended, it is (almost) impossible or at least very difficult to create an anonymous google account, which is required for posting, because Google requires Tor users to use mobile phone verification, which is not available for anonymous users. Google bans sms to web services as well. I don't know if there are other online hosted NNTP readers, which allow posting for Tor users.

Mixmaster can be used to post to news groups. When it is in Whonix-Workstation ™ following the instructions in the Mixmaster article, Mixmaster traffic will be even routed through the Tor network.

An open news server is defined as allowing access to all news discussion groups.

It is difficult to find a free NNTP server even for discussion groups. And no, we are not looking for a trial. Use search terms like "free NNTP server". The nyx.net list