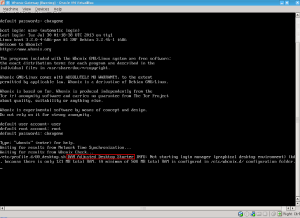 The following greeting banner appears when a terminal shell bash prompt is opened.

Whonix Copyright (C) 2012 - 2021 ENCRYPTED SUPPORT LP Whonix is Freedom Software, and you are welcome to redistribute it under certain conditions; type "whonix-license" <enter> for details. Whonix is a compilation of software packages, each under its own copyright and license. The exact license terms for each program are described in the individual files in /usr/share/doc/*/copyright.

Whonix GNU/Linux comes with ABSOLUTELY NO WARRANTY, to the extent permitted by applicable law; for details type "whonix-disclaimer" <enter>.

Whonix is a derivative of Debian GNU/Linux and based on Tor.

Whonix is produced independently from the Tor (r) anonymity software and carries no guarantee from The Tor Project about quality, suitability or anything else.

Whonix is experimental software by means of concept and design. Do not rely on it for strong anonymity.

Type: "whonix" <enter> for help. uwt INFO: Stream isolation for some applications enabled. uwt / torsocks will be automatically prepended to some commands. What is that? See:

The process is now complete.

To shut down Whonix ™, open a terminal and run.

Alternatively, use the menu option:

is a feature inherited from Debian GNU/Linux which is unfamiliar to many users. The following keyboard shortcuts activate the Debian (not Whonix ™) feature:

In the Whonix ™ case, the virtual console will show host login:. This can be confusing and has nothing to do with the actual host that Whonix ™ is running on. The string host is retrieved from file /etc/hostname which for privacy reasons is set to host in Whonix ™. Therefore do not enter your host (the system Whonix ™ is running on) username or host password.

Due to technical limitations, an easier to understand presentation like Whonix ™ username login: or something similar cannot be shown. [3]

This process is similar to Disable Terminal Emulator Banner.

2. Run the following command to restore the original bashrc (untested). [4]

The procedure is complete.

2. Search for the following.

Out-comment, add a hash symbol ("#") in front of the two lines. Or replace the content, copy/paste the following which does the same.

Autologin should be disabled after reboot. 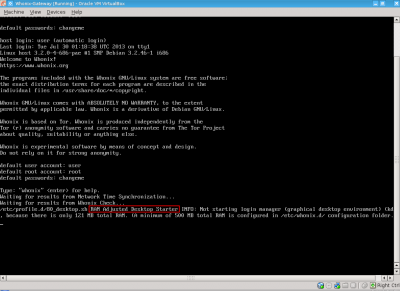 RAM Adjusted Desktop Starter will not start the desktop environment. The terminal-based Whonix-Gateway ™ can be used instead.

When booting up, a prompt will appear offering to prevent Xfce from starting. Users can also manually press Ctrl + C for the same effect.

By default, Whonix-Gateway ™ VMs are configured with 1280 MB virtual RAM. This can be reduced on systems with low available resources.

Users with low RAM resources should find this convenient because Whonix-Gateway ™ RAM can be reduced to 256 MB and still function.

Further, if something needs configuring or checking, 512 MB RAM can be assigned to automatically boot into the graphical Xfce desktop. Additional settings are available in folder /etc/rads.d to configure this feature: additional RAM can be added (but still not choosing to boot into a desktop environment), different display managers can be used and so on. See file /etc/rads.d/30_default.conf for configuration examples.

Full-screen mode leads to the Whonix ™ (and Debian) default resolution and color depth of 1920x1080x24. Having a common value for these identifiers reduces the fingerprinting risk to the user. Full-screen mode also helps to prevent users from accidentally launching applications on the host (such as a clearnet browser), instead of within Whonix ™.

A number of displays found in high-end laptops and desktops have High Dots Per Inch (HiDPI), providing a high resolution in a relatively small format. High-resolution mode can cause problems with certain software and the following adjustments may be necessary to improve HiDPI presentation in XFCE. [6]

Before following these instructions to wipe the whole Xfce settings folder and restore defaults, it is recommended to backup existing Xfce settings.

The process has been completed.

. Overriding Qubes' GUI virtualization daemon restrictions means the colored decorations drawn by each VM window will not be visible. In this case, a malicious application might not actually release the full screen (while it appears normal), or the full desktop may be emulated so users are tricked into entering sensitive information inside false "trusted" domains. [7]

Have you helped with Whonix? If so add your name to the authorship page.