Whonix ™ in VirtualBox - Troubleshooting - Whonix ™ does not Start?

Issues on this page are sorted roughly in order of issue prevalence. More common issues are on top.

In many situations, the following steps will fix VirtualBox issues.

If the "Failed to load unit 'PATM' (VERR_SSM_FIELD_NOT_CONSECUTIVE)." error appears, VT-x must be enabled in BIOS settings, see instructions.

VT-x is disabled in BIOS[edit]

If the following error message appears.

Then enable VT-x in BIOS settings.

Do not update whilst the VMs are running, otherwise VirtualBox must be reinstalled.

This happens when upgrading VirtualBox on the host while existing VMs are still running. The solution is to shut down and restart all VMs.

This might relate to a low disk space issue -- research the issue further with search engines.

If the shared clipboard and drag’n’drop to/from host is non-functional, this can relate to the version of guest additions installed in Whonix and/or the version of VirtualBox running on the host. [4] 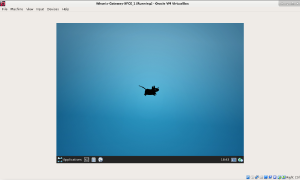 If the display presents like the image on the right-hand side, then you are affected by a screen resolution bug which only occurs in VirtualBox.

If the issue still persists, to correct resolution, try the following workarounds. 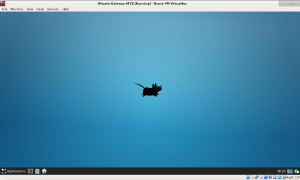 If the method above did not work, another option is the following. Inside the virtual machine:

If it still does not work, a final option is the following.

Inside the virtual machine [5]:

If a black screen appears, try the following possible solutions.

Try to boot with the nomodeset kernel parameter. If that works, please post a forum report and then make the change permanent. [7]

Virtual Console If it is possible to switch to a virtual console, this can help with debugging.

If the virtual machine ever shows an aborted status, perform these steps:

Whonix ™ provides VM images that operate inside of the VM. Whatever occurs inside a VM should never lead to a crash (status aborted) of the host virtualization software, VirtualBox.

In Whonix ™ 15.0.1.3.4 and above 3 virtual CPUs is now the default setting; 4 were previously used. As a result, this workaround should no longer be required for most users.

If this error appears, sometimes it helps to:

Using the VirtualBox GUI to import Whonix ™ images should work well in most cases. If not, follow the steps below.

1. Check if there is enough free disk space.

2. Refer to the Whonix ™ Install Screenshots and/or Video Tutorials.

4. Use the VBoxManage command line tool and copy the output.

5. Navigate to the folder where Whonix ™ was downloaded and import Whonix-Gateway ™ and Whonix-Workstation ™ by using the VBoxManage command line tool.

When reporting an issue in the Whonix ™ forums [archive], please add the exact steps which led to the problem. Also include as much relevant information as possible; see below.

Bugs can also be reported against upstream VirtualBox [archive]: VirtualBox bugtracker [archive] / VirtualBox forums [archive]. Bug reports must be thorough otherwise it will not lead to a solution, see: bug reporting instructions [archive].

Interested in becoming an author for the Whonix News Blog [archive] or writing about anonymity, privacy and security? Please get in touch!

This is a wiki. Want to improve this page? Help is welcome and volunteer contributions are happily considered! Read, understand and agree to Conditions for Contributions to Whonix ™, then Edit! Edits are held for moderation. Policy of Whonix Website and Whonix Chat applies.