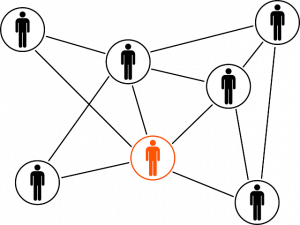 Even though the issue is happening inside Whonix ™, the cause is most often unrelated to Whonix ™ source code. Qubes is developed by Qubes OS Project

, which is an independent entity. The is the norm in Linux distributions. To learn more about such relationships see

. A different issue could be a Network Obstacle.

Whonix ™ does integration work Whonix ™ integrated into the Qubes platform. To use a simple analogy, Whonix ™ stays "on the outside". Very few modifications are made to Qubes through Qubes dom0 package qubes-core-admin-addon-whonix

Qubes R4.1 was released with some "strange" connectivity bugs such as this

A Qubes user might think the user has updated Qubes which should include bug fixes but actually the update might not have happened due to Qubes Updater issues. Quote:

The situation is however complicated

due to Qubes Updater Issues

, most notably such as:

To remedy this kind of issue, there are a few approaches.

It is often suspected that sdwdate might be the cause.

This is unlikely. No issues are reported for Whonix ™ on other platforms such as Whonix ™ for VirtualBox which has a magnitude of more users but no (or very rare) similar connectivity bug reports.

However, at time of writing sdwdate-gui is mostly a unsuitable connectivity troubleshooting tool.

To exclude the possibly that sdwdate is the cause, the user could attempt to disable the autostart of sdwdate.

1. The user is encouraged to learn about general (unspecific to Whonix ™) Qubes Updater issues and make sure updates are really installed. See also Qubes/Update.

This procedure might help, but should not be considered a final solution. [1]

Please report if this workaround helped.

Properly suspend all VMs, not only those with PCI devices #473

The community is encouraged not to wait for Whonix ™ to fix these connectivity issues since this unfortunately is unlikely to happen. This is because Whonix ™ developers are not affected by these connectivity issues, these are non-reproducible issues and sometimes these are caused by already fixed Qubes bugs which are not yet fixed on Qubes due to Qubes Updater issues.

If using multiple Qubes-Whonix ™ VMs, the user should make sure to have followed the relevant documentation.

On the Multiple Qubes-Whonix Templates wiki page take special note of the warning box in the UpdatesProxy chapter.

A fully updated Qubes should not require any of the following steps.

) should look same as /etc/qubes/policy.d/80-whonix.policy in dom0.

2. The following files are legacy and could optionally be safely removed if step 1 was confirmed.

Debugging Qubes qrexec is largely unspecific to Qubes-Whonix ™. Qubes qrexec debugging instructions from other resources such as perhaps the Qubes website should equally apply.

Note: Any commands that follow must be run inside Qube dom0.

See if you can make head or tail of qvm-tags developer notes. If not, skip this step.