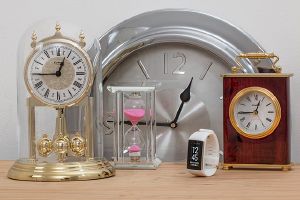 Warning: The system clock inside Whonix ™ is set to UTC to prevent against time zone leaks. This means it may be a few hours ahead or behind the user's host system clock. It is strongly recommended not to change this setting.

A reasonably accurate host clock is crucially important. An inaccurate clock can lead to:

Therefore, at all times it is recommended to have a host clock with accuracy of up to ± 30 minutes. Clocks that are days, weeks, months or even years slow or fast can lead to many issues such as connectivity problems with Tor, inability to download operating system upgrades and inaccessible websites. [1]

To protect against time zone leaks, the system clock inside Whonix ™ is set to UTC. This means it may be a few hours before or ahead of your host system clock. Do not change this setting!

If the host clock (in UTC! [2] [3]) is more than 1 hour in the past or more than 3 hours in the future, Tor cannot connect. In this case, manually fix the host clock by right-clicking on it, and also check for an empty battery. Then, power off and power on the Whonix-Gateway ™ (sys-whonix) and Tor should be able to reconnect.

Non-Qubes-Whonix: It is strongly discouraged to use the pause / suspend / save / hibernate features.

Qubes-Whonix ™: It is strongly discouraged to use the pause feature of Qube Manager, but it is is safe to use the suspend or hibernate feature of dom0.

If you are interested in using the pause / suspend / save / hibernate features, please click the expand button for further instructions.

In case sdwdate fails to properly randomize the system clock, it is possible to manually set a random value.

The first step should be completed on the host to ensure the host clock is set to the correct time.

1. On the host (Qubes-Whonix ™: dom0), run the following command to report the time in UTC.

The output should be similar to the following. [9]

Run the following command with the correct date and time parameters. [10] [11]

4. If Tor is still not functional, try restarting Tor.

Tor should work once correct clock values are set, but that can be manually tested with systemcheck

sdwdate is a Tor-friendly replacement for rdate and ntpdate that sets the system's clock by communicating via end-to-end encrypted TCP with Tor onion webservers. Since timekeeping is crucial for security and anonymity, blocking network access until sdwdate succeeds is sensible. [13]

sdwdate is functional on both Whonix-Gateway ™ and Whonix-Workstation ™, but in some cases it is possible for the time to leak before it is changed. Potential leak channels include time or other servers, daemons, and client programs such as Tor Browser which are used before sdwdate successfully changes the system clock for the first time after boot. [14] In this case, the user is only left with the protections afforded by Boot Clock Randomization. [15]

Warning: This is for testers-only!

Note: The following instructions should be applied on Whonix-Gateway ™ and inside Whonix-Workstation ™.

(Qubes-Whonix ™: It is the easiest to apply changes in the Whonix-Gateway ™ and Whonix-Workstation ™ Templates since these settings will be inherited by all App Qubes. Alternatively, apply this setting in App Qubes, see footnote. [16])

Open file /etc/whonix_firewall.d/50_user.conf in an editor with root rights.

2. Copy and paste the following text.

3. Save the file and reboot.

4. Have the changes take effect.

If ISP tampering with NTP is ever confirmed, users are advised to disable NTP and manually update the host clock out-of-band. For example, a watch or atomic clock

can be used for this purpose. If the tampering is targeted and not a widescale attack, then the user already has much bigger problems to worry about than NTP; see Confirmation Attacks.

If following the advice above -- disabling NTP on the host and adjusting the clock out-of-band -- be aware that clearnet traffic might be easier to fingerprint. [17] The reason is that it introduces a device issuing clearnet traffic (such as OS updates), but without the use of NTP. It is unknown how many people have NTP which is deactivated, broken, uninstalled, or never in fact installed in the first place. Also unknown is how many people are using alternative time synchronization methods such as authenticated NTP, tails_htp, tlsdate, sdwdate or similar. However, search engine research suggests that very few people fall into both these categories.

The host system clock synchronization mechanism still uses unauthenticated NTP from a single source. This is not optimal, but there is no real solution to this problem. [18] A potential attack vector is created by this NTP behavior; the ISP and/or time server could either inadvertently or maliciously introduce a significant clock skew, or the host clock could simply malfunction.

If the host clock value is grossly inaccurate -- more than one hour in the past or more than 3 hours in future -- Tor cannot connect to the Tor network. [19] This is easily solved by manually fixing the clock on the host, then powering the Whonix-Gateway ™ (sys-whonix) off and on again.

Another side effect of a significantly inaccurate host clock concerns operating system (OS) updates and cryptographic verification on the host. Until the host clock is manually fixed, it may no longer be possible to download updates or verify SSL certificates correctly with the host browser.

Users should always check whether a host clock defect relates to an empty battery before assuming the ISP is tampering with NTP.

The adjustment attribute takes any arbitrary value for seconds. The user must pick a random value that is unknown to others, ranging between 0 and 900 (a 15 minute range).

Unfortunately, it is not yet possible to set a random clock offset for Qubes-Whonix ™ VMs to prevent clock correlation attacks since it is unsupported by Xen

, which may not be possible without Linux kernel and/or Xen patches. For a detailed discussion of these issues, see here

VirtualBox has a feature to spoof the initial virtual hardware clock offset by setting the clock X milliseconds in the future or past. The syntax is outlined below.

It is recommended to add a random delay within the following range.

A spoofing example is below. Users should select their own unique and random values for both the past (-) and future (+) within the specified range. Different values should be used for each distinct VM (on the host).

Warning: This action is recommended against and is usually not required. In all cases, first check with the Whonix ™ developers.