From Whonix
(Redirected from Arm)
Jump to navigation Jump to search 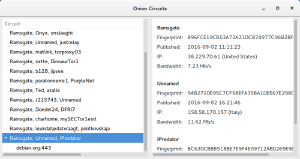 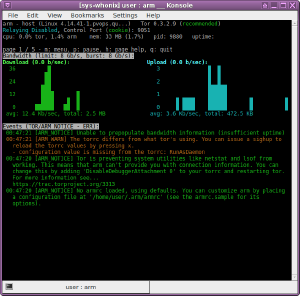 Talking to the real Tor Controller[edit]

To talk to the real Tor Controller, you should run the commands on the Whonix-Gateway ™, as the Whonix-Workstation ™, the connection goes through the onion-grater controller proxy

On Whonix-Gateway ™. test is the example password being used. Feel free to use a different/stronger one.

of your choice with sudoedit.

Should reply the following if successful:

Will do nothing after this, but when you start using Tor (i.e. by running Tor Browser, APT or so), it will show the stream events similar to the example below:

Whonix ™ has a wrapper called tor-ctrl to communicate directly with tor's controller. By using it, you don't have to worry about authentication method, or which program to use to connect to the socket, or which program to use to convert the cookie to base32. As the intent of this section is to teach how to communicate without external programs, this is mentioned at last. If you wish to accomplish the same as above, you can do so with tor-ctrl -w setevents stream.

is installed by default.

For example, to get a new circuit, run.

The output should show:

Vidalia is recommended against because development has ceased, leading to it being removed from all Debian variants (stretch, sid etc.) as well as from Tor Browser Bundle v3.5 by The Tor Project. [12] [13] Vidalia had a number of limitations, such as an inability to fully control Tor -- it could not stop Tor which came with the Debian package because it is started as user "debian-tor". It also could not edit /usr/local/etc/torrc.d/50_user.conf [14] and did not understand obfuscated bridges. Since Vidalia has been deprecated and provides a pretty bad and confusing user experience, it is simply better to use nyx. [15]