I2P is an anonymous network built on top of the internet. It allows users to create and access content and build online communities on a network that is both distributed and dynamic. It is intended to protect communication and resist monitoring by third parties such as ISPs.

Aside from anonymizing traffic within the network, I2P functions with the same capabilities as the Internet, however its design and decentralization create a censorship resistant environment for the free-flow of information.

Mirrored sites hosted on the network allow access to news outlets and other resources in areas where information is being filtered or denied. Online communities wishing to organize in restrictive environments can do so anonymously to mitigate political threat and protect each other.

The I2P anonymous network exposes a simple layer that applications can use to anonymously and securely send messages to each other through "tunnels". The network itself is strictly message-based (IP), but there is a library available to allow reliable streaming communication on top of it (TCP). All communication is encrypted end-to-end -- in total there are four layers of encryption used when sending a message -- and even the end points ("destinations") are cryptographic identifiers (essentially a pair of public keys). [1]

This design is known as garlic routing [archive] which is a variant of onion routing [archive] (used in the Tor network) and benefits from the research on the latter but makes some different tradeoffs. [2] Each client application has their own I2P 'router' that finds other clients by querying against the fully distributed 'network database' - a custom structured distributed hash table (DHT) based on the Kademlia algorithm [archive]. Every router transports traffic for its peers which it uses as cover traffic for its own. To learn more about I2P technical details, see here [archive].

In contrast to the Tor network, I2P is focused on creating a community around P2P darknet services rather than providing "outproxies"(exits) to the clearnet. The I2P development team [archive] is an open group that welcomes all parties who are interested in getting involved [archive]. All the code is open source [archive]. The core I2P Software Development Kit (SDK) and the current router implementation is accomplished in Java, [3] and there is a simple socket based API [archive] for accessing the network from other languages (with a C library available, and both Python and Perl in development). The network is actively being developed and has not yet reached the 1.0 release, but the current roadmap [archive] describes their active schedule.

Many of Tor's concepts have (virtual) equivalents in I2P, despite the terminology [archive] being somewhat different.

The I2P comparison page notes the relative strengths of Tor and I2P; those are summarized below.

How-to: Use I2P in Whonix[edit]

There are two methods of using I2P in Whonix ™:

The inproxy method is better suited for causal use of I2P. In this instance, users just want to anonymously view an Eepsite and are not concerned about eavesdroppers so long as anonymity is assured.

It is safer to use the I2P client inside Whonix ™, since all I2P traffic is tunneled through Tor and access is fully featured. This is a little more difficult than installing I2P the ordinary way, that is using I2P in the clear, not over Tor.

Readers who are considering using I2P in Whonix ™ are suggested to review the related forum thread [archive].

There are several I2P inproxies and they have similar functionality to Tor2web [archive]. [11] Simply use Tor Browser which is installed in Whonix ™ by default to directly access the I2P proxies listed.

Although this is the easiest method, on the downside end-to-end encryption is lost when connecting to the eepsites. This is not the case when I2P is installed directly inside Whonix-Workstation ™ or if I2P is used in the ordinary way. Further, potentially Tor Exit Nodes can Eavesdrop on Communications if an inproxy uses plain http, since it is an unencrypted connection. This risk is averted if the inproxy uses https or is reachable via an onion service. In any case, the I2P inproxy administrator can see all of your traffic in the I2P network and it is impossible to prevent that.

The preferred configuration is to connect to Tor before I2P inside Whonix-Workstation ™: user → Tor → I2P → Internet

Before configuring this tunnel link, it is recommended to read the following related wiki entries:

At the bottom of the configuration file, add.

The following settings are recommended:

Note: The following steps will no longer be required once Whonix releases a custom Tor Browser for connecting to alternative networks. [19]

In Tor Browser, type about:config into the URL bar and press Enter. Make the following changes:

This step is unnecessary if I2P was set to automatically run as a daemon.

To start the I2P service, run.

To stop the I2P service, run.

To check the status of the I2P service, run.

Before using I2P, it is recommended to access the I2P router configuration and make several adjustments for better performance. 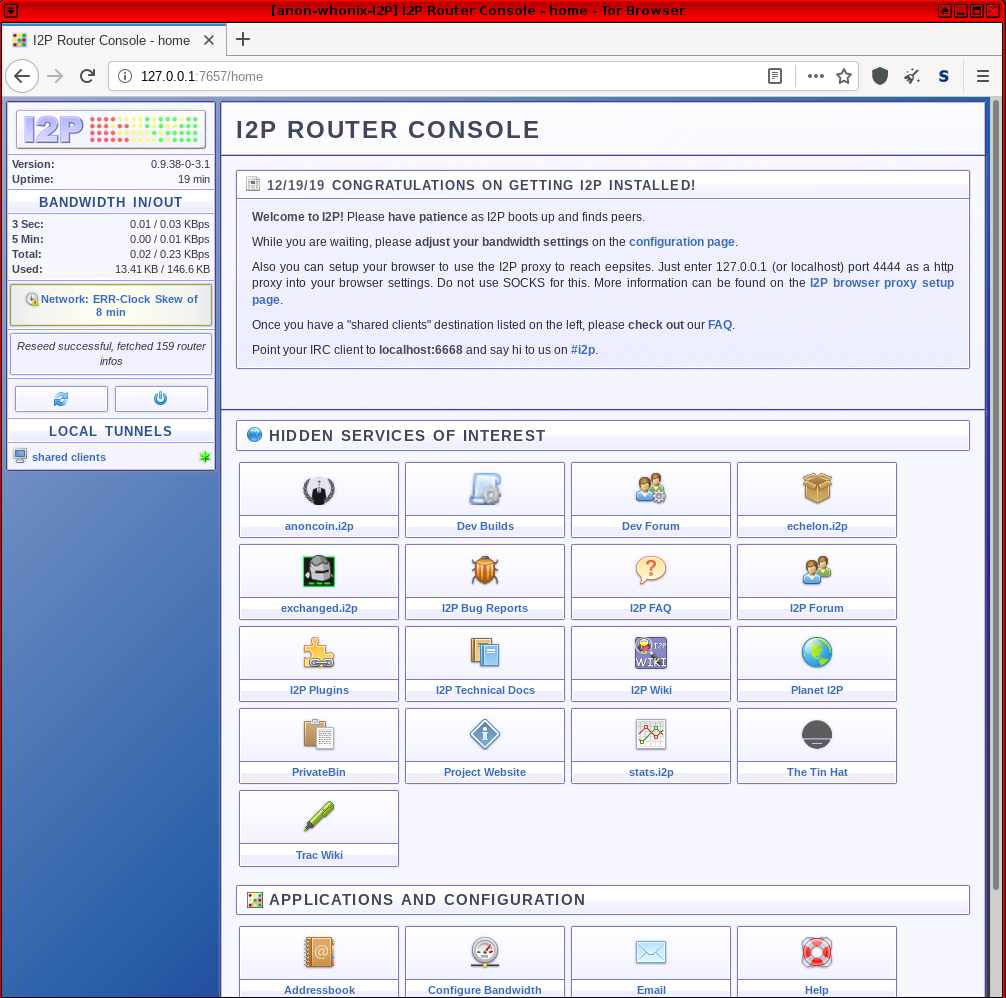 If errors appear like: "Network: ERR-UDP Disabled and Inbound TCP host/port not set" or "ERR-Clock Skew of X min", they can be safely ignored.

Note that once the Local Tunnels (shared clients) section shows a green connection, I2P should be fully functional and it is possible to browse eepsites like echelon.i2p. Some users report this process can be lengthy and take more than 10 minutes before the tunnels are stable/available. 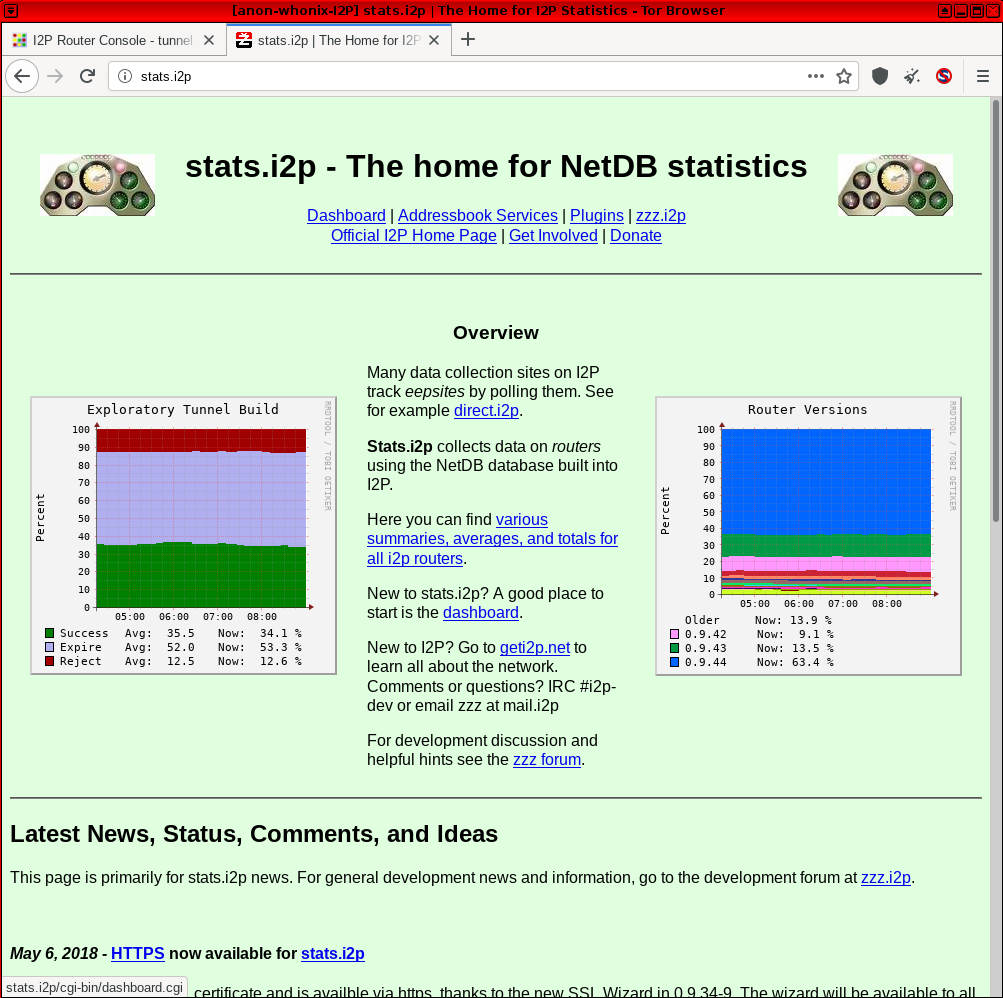 The I2P supported applications webpage [archive] warns that no guarantee can be provided about the safety of compatible applications, plugins and services -- they must be properly configured and might jeopardize anonymity due to design faults or carelessness. Carefully vet these tools and research them diligently beforehand.

Many interesting features and functionality are implemented for I2P in the form of stand-alone packages or plugins that can be optionally installed from their official plugin eepsite [archive]. Various tools are available for:

The instructions are simple to follow. The signing keys for these plugins are already built into the official I2P package and so are already white-listed. This is not a complete list.

For documentation about default port numbers of I2P plugins, see this page [archive].

I2P-Bote [archive] is a serverless, encrypted email plugin that uses I2P for anonymity. Messages are stored in the distributed hash table (DHT) [archive] for 100 days, during which the recipient is able to download them. Emails are automatically encrypted and digitally signed, which means only the intended recipient can read them and they cannot be forged by third parties.

To back up I2P-Bote data, copy the i2pbote folder inside the I2P config directory (~/.i2p/i2pbote on Unix systems or /var/lib/i2p/i2p-config when running as a daemon).

Compartmentalize activities and only use the I2P-Bote/Susimail VM snapshot for this purpose. Generally, applications that run with a browser interface are vulnerable to a whole class of bugs, including cross-site request forgery (CSRF) [archive].[23][24]

RetroShare is a friend-to-friend [archive] (F2F) network that enables end-to-end encrypted communications, including general messaging, mail, forums, publish-subscribe messaging ('pubsub'), file exchange and even telephony. It can be used as an alternative to Syndie (see further below) and can be tunneled through I2P for enhanced anonymity.

Follow the steps in this guide [archive] to connect to others over I2P. Also see: I2P Hidden RetroShare Nodes [archive].

Syncthing [archive] is a popular libre software for file syncing based on the bittorrent protocol. [25] Syncthing provides several benefits: [26]

It is possible to tunnel Syncthing traffic over I2P as shown in this guide [archive]. [27]

Syndie [archive] is I2P's distributed (decentralized) forum software, allowing asynchronous conversations between anonymous participants. It was the focus of I2P's creator shortly before he ceased public activity. It supports single and multiple author modes, adjustable visibility of posts and post moderation. Syndie features its own minimalist and secure reader to protect against browser exploitation. In 2018, Syndie was being rewritten in another programming language to provide a more modern and simple interface, along with basic image rendering. [28]

A key benefit of Syndie is that unlike centralized forums, it cannot be easily taken offline via denial of service attacks or administrative action, and there is no single point to monitor group activity. Offline forum participation is possible, by 'syncing up' any accumulated changes when it is convenient (days, weeks or even months later). In addition to simple text messages, entire webpages or the full content of sites can be packaged into a single post, which can even be browsed offline.

On the whole, Syndie works at the *content layer* - individual posts are contained in encrypted zip files, and participating in the forum means simply sharing these files. There are no dependencies upon how the files are transferred (over I2P [archive], Tor [archive], Freenet [archive], gnutella [archive], bittorrent [archive], RSS [archive], usenet [archive], email [archive]), but simple aggregation and distribution tools will be bundled with the standard Syndie release.

Unfortunately, I2P is not yet natively supported as a tunneling option in ZeroNet. However, progress has been made towards this goal since 2016; see footnotes to follow recent GitHub developments. [30] [31]

It is possible to run I2P and Tor simultaneously on Whonix-Gateway ™:

This configuration is untested by Whonix ™ developers and it is considered experimental. Also, Whonix ™ developer HulaHoop has noted it is difficult to have a preconfigured Tor Browser for accessing .i2p domains and other non-clearnet top-level domains, as well as optimizing I2P operations when tunneled over Tor.

Want to get involved with Whonix ™? Check out our Contribute page.